What is agroecology and how does it help farmers?

What is agroecology and how does it help farmers?

As published in Landbou Weekblad March 2014
Imagine; we need to double our agricultural output to make provision for more inhabitants, a growing middle class that wants more meat and rising demand for biofuels? However, our actual output in established economies is not only levelling off, but seems to be already declining! 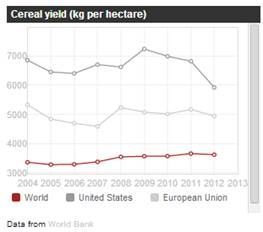 Climate change and its modelling seem to add to the challenge (Parry et al. 2004). Rising temperatures could result in a decline in global yield (Nelson et al. 2009) and according to Cline could result in a decrease of 10-15 percent by 2080, even with carbon fertilization. The logic is; although rising carbon levels increase the impact of atmospheric fertilization for plants, added accelerated plant growth due to rising temperatures outpaces the ability of seeds ripening. This, together with expected water shortages and increases in draughts, will reduce future yield potential (Cline 2007) . All this paints a bleak future and seems a fair shot from doubling our output in the next 30 years.
Agroecology, in combination with high tech solutions, result in clever management practices that can more than offset the bleak future illustrated above. Through a type of sustainable intensification, we can drastically increase yield. One example: Despite the current application of 2.5 million tons of pesticides worldwide, more than 40% of all potential food production is lost to insect, weed, and plant pathogen pests (Paoletti & Pimentel 2000). MySmartFarm’s initiation of a disease research project will result in disease prediction modelling through making use of big data and high throughput-computing, utilizing machine intelligence and computer modelling, to accurately predict disease- and pest pressures. The farmer can therefore target his applications more accurately, saving on chemical input. More on this to follow with one of my future posts.
Yet agroecology is not only about saving on chemical inputs. By definition, it is an ecological approach to agriculture that views agricultural areas as ecosystems and is concerned with the ecological impact of agricultural practices (Merriam Webster n.d.). Agroecologists do not unanimously oppose technology or inputs, but assess how it can be used in conjunction with natural, social and human assets (Pretty 2008). Agroecologists use natural solutions and strengths of ecosystems to increase production and decrease inputs. They make for example clever use of crop rotations, inter-planting, cover crops, companion planting, no till, eco- & biodiversity belts, onsite-generated manure and more.
Agroecology deploys these tools within the complexity of a farm context and adopted in a manner to suit the farm and its environment. These tools promise exciting results, scientifically proven. Therefore, in the next few months, I will be giving examples of successful operations making use of these technologies and will outline the parameters, how these can grow into becoming innovations and trends that can be practically implemented by farmers.
Wolfgang Johann von Loeper

Select a course first to display its contents.

No available contents for

There are no free, paid or coming soon courses in your school yet.
Why don't you create one?

Oops, your school's owner is working hard preparing the courses for you.

Oops, you haven't created any courses yet.

Wouldn't it be a good idea to create a course?

No blog posts found in your blog. Why don't you create one?